Take a walk along Davenport Road, take a right turn in the space between two rows of houses opposite Gamel Road and you’ll have found the Garden of Hope. We understand this site to be where the original builders of the local estate kept their materials and tools. It had become a bit of a dumping ground until a local resident, along with Friends of Evington and Evington in Bloom cleared it and developed the garden.

We have been asked to join in with the development, in particular by wilding up the grassy margins at the sides of the garden and the woodland to the rear. 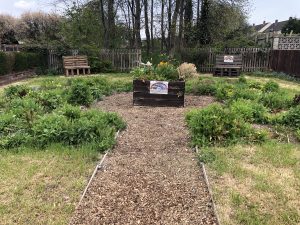 The Entrance and Pathway

You can approach the garden by taking a short walk up the slope, along the bark-clippings pathway. Ahead you will see a large wooden planter – in need of a little tlc – surrounded by the relatively-formal flower beds, planted out with perennials loved by pollinators. The are a couple of benches for visitors to sit, relax and have a chat and, with the south-facing aspect, it’s tempting to soak up the sunshine and stay awhile.
Behind the benches there’s a simple wooden-paling fence behind which is a small area of woodland. 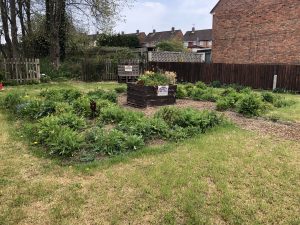 There is a sense in which this is a formal set of beds, with its rectangular shape and regular layout of lavender, peony and papaver (oriental poppy) plants. However, in most other respects this is quite a casual feature as bees whiz among the dead-nettle that has made a home in the spaces between and a red campion sends its stems around a poppy. In other words, the beds have been allowed to find a life of their own and, basically, anything that might be attractive to pollinating insects has been allowed to do its things. 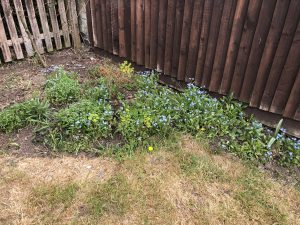 To each side of the garden is a straight border, currently containing some bulbs, the odd perennial – including an ice-plant or sedum – and a smattering of forget-me-nots. As part of our Community Nature Reserve, we are turning this into wildflower grassy margins.
We have already mown the grass at the margins along the borders and have raked up the soil so that the edge of the border and grass are at the same height. The next step was to get the worst of the weeds out of the border and then sowing it with wildflower seeds. The idea is that over time, the grassy margin and border will become one, with just a path mown alongside. In the meantime we’re mowing the margins and removing the clippings as often as possible, to control the growth of the grass before sowing more seeds in the autumn. 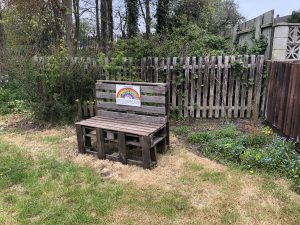 Surprisingly, given the fact that the garden faces onto a bustling street, with bus route and busy shops, the Garden of Hope is a lovely, peaceful place to rest and take a bit of time out. The benches on either side are comfortable enough and face south-ish so form a good place to catch a bit of warming sun. Behind them is the fence that separates the garden from the woodland behind. We have sown some sunflower seeds here, as part of Evington Community Nature Reserve’s Sunflower Target 100 and are planning to plant a range of flowering plants to create a bright yellow wall. 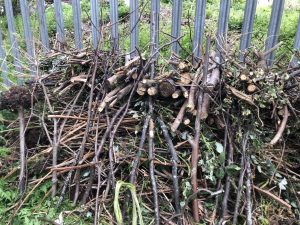 The woodland to the rear of the garden has great potential to become a mini-managed nature-reserve. Our first job has been to clear a pathway through the wood so that people can easily access all parts of it. The next steps will involve creating features within the wood that people can enjoy as they take a walk through. Ideas we have in mind include a pond/bog-garden, blossom, fruit and nuts thicket, fruits-of-the-forest foraging area and a birds’ winter food hall.
One feature we have begun is a log pile – using twigs, branches and trunks that we have found lying around the site.